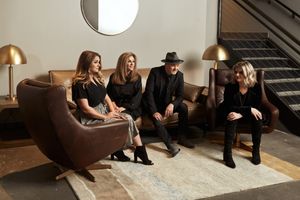 NASHVILLE, Tenn.—Gospel Music Hall of Fame members and Daywind recording artists The Nelons are beginning a new era of concert performances with the announcement of a booking partnership with JRA Faith. The agency will help facilitate the award-winning family group’s growing number of shows in performing arts centers and theatres, along with churches, festivals and conferences where they have been mainstays for decades.

JRA Faith will be booking The Nelons’ popular "Americana Tour," "Winter’s Carol Christmas Tour," and "Be Our Guest Tour," along with stand-alone performances.

“JRA Faith is excited to welcome The Nelons to our agency,” said Jeff Roberts, president, JRA Faith. “They have been legends in the Southern Gospel genre going all the way back to 1977, and with their loyal fanbase and strong history of repeat performances, they are a great addition to our roster.”

“We are honored to be joining the stellar roster of JRA Faith,” said The Nelons’ Jason Clark. “We have long admired their team’s commitment to excellence as they create and support state of the art performances from many of our industry’s leaders. In the last few years, we have seen our Americana and Christmas outings draw many new fans, and we have a vision for making these tours better than ever. This new relationship will help us do that.”

ABOUT THE NELONS
Inducted into the Gospel Music Hall of Fame in 2016, The Nelons have been one of Gospel music’s best-loved families for nearly five decades. The group has been nominated for three GRAMMY® Awards; received eight Dove Awards—including Bluegrass/Country/Roots Recorded Song of the Year in 2021 (“If God Pulls Back The Curtain”); 14 Singing News Fan Awards; a Silver Angel Award; a People’s Choice Silver Telly Award; and a New York Film Festival Award. The Nelons have recorded more than 35 albums, amassing over 20 Top 5 Southern Gospel radio singles, including such classics as “We Shall Wear A Robe and Crown,” “Come Morning,” “O For A Thousand Tongues” and “Thanks.” They have frequently been featured on the best-selling Gaither Homecoming recordings and videos, and have performed on the Grand Ole Opry, among other historic venues.

The Nelons continue the rich tradition initiated by family patriarch Rex Nelon, father of Kelly Nelon Clark, who began his legendary career when he joined Gospel Music Hall of Fame members The LeFevres in 1957. The group eventually became known as The Rex Nelon Singers before changing their name to The Nelons in 1982. Through the decades, The Nelons’ polished harmonies and performances, and their anthology of timeless songs, have helped to expand the audience for Gospel music around the world.