The Nelons "Excuse Me, Are You Jesus?" Concept Music Video Nominated for People's Choice Telly Award

Nashville, TN (February 11, 2013) – The Nelons' concept music video of the song "Excuse Me, Are You Jesus?" has been nominated for the 34th Annual People's Choice Telly Awards, it was announced last week in New York, NY. The true-to-life story, put to song by legendary Christian music icons Bill & Gloria Gaither and Country music superstar Larry Gatlin tells the story of a man who makes a startling connection upon missing his home-bound flight. Point Light Pictures, LLC was brought to the task of making the story come to life. While the music video has been displayed at numerous events - live concerts, Gaither Homecoming Tour before thousands in attendance, Pastor David Jeremiah's "Turning Point" rally at Phillips Arena, and many churches - it has not been viewable on-line, until now. Until March 1, 2013, "Excuse Me, Are You Jesus?" has been unlocked as a selection of the 34th Annual Telly Awards People's Choice Awards on YouTube.   To view the video and vote, follow this direct link to the video – CLICK HERE (computer only, no mobile device) – and click the "thumbs up" at the bottom of the video. 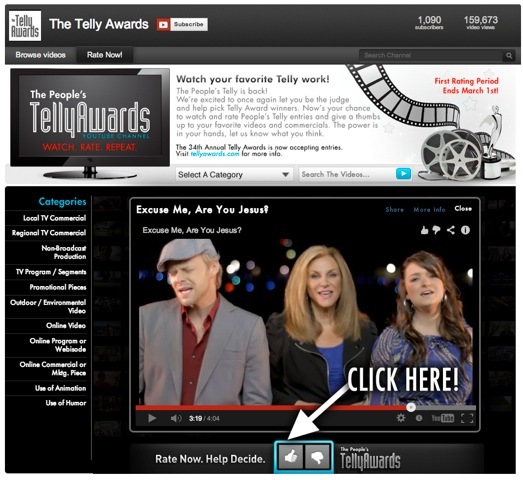 "We're excited about this opportunity for the Nelons' work to be promoted and recognized," states Don Schaffer, owner of Point Light Pictures, LLC. Kelly Nelon comments: "This song means so much to our family and the reaction we've seen from friends around the country has been exciting. We invite our friends to share this video with everyone they know and, of course, vote!" Bill Gaither states, "As a co-producer of this album and co-writer of this song I am thrilled to see it nominated for such a prestigious award as the People's Choice Telly Award. It's been a wonderful journey partnering with the Nelons on this recording."

“The Telly Awards has a mission to honor the very best in film and video,” said Linda Day, Executive Director of the Telly Awards. “The Nelons' accomplishment illustrates their creativity, skill, and dedication to their craft and serves as a testament to great film and video production.”

This is not the first time The Nelons have been recognized for an innovative video. In 1987, their concept video for "Famine In Their Land," was recognized with a New York Film Festival Bronze Award and won a DOVE award for Short Form Music Video of The Year.

ABOUT THE NELONS: The Nelons are a second-generation, Gospel Music Group, founded by Hall of Fame vocalist Rex Nelon. Their iconic sound and style has garnered multiple Gospel Music Association DOVE Awards, GRAMMY Nominations, and many other honors. Their discography includes over seventy charting radio songs, many of those Top Ten hits. This family trio continues to be creative and innovative in their sound and production as their music reaches across spectrums and genres of styles, loved by generations of fans.