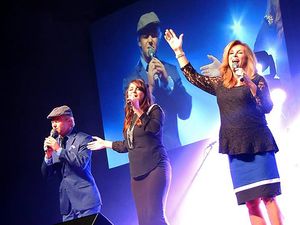 Audio-Technica Welcomes The Nelons To Their Artist Family
Atlanta, GA - Internationally recognized audio equipment company, Audio-Technica recently announced the addition of popular multi-Dove Award winning and Grammy nominated recording artist, The Nelons to their family of artists. Audio-Technica will supply The Nelons with microphones and additional audio equipment for their many concert events schedule throughout the remainder of 2013 and 2014.
For three decades, The Nelons (pictured in jpg) have been bridging the traditional sounds of Southern Gospel with contemporary influences that inspires listeners of all ages. The group, who has enjoyed much success as a part of the prestigious Gaither Homecoming Tour and Video Series, continues to cross generational gaps, presenting rich harmonies that have been embraced by audiences from all walks of life. The musical ministry of The Nelons was born in the late 1970s from a name that has been synonomous with Gospel Music for nearly a century.
With numerous awards and accolades, including three Grammy nominations, six Gospel Music Association Dove awards and many songs that have soared to the top of national radio charts, this family trio continues to produce innovative music. Their musical message embraces their traditional roots, while simultaneously reaching beyond various musical boundaries with an emphasis on introducing songs for the church, all the while bridging the generational gap of music lovers.
Established in 1962, Audio-Technica is a worldwide group of companies devoted to the design, manufacture, marketing and distribution of problem-solving audio equipment. Initially known for state-of-the-art phonograph cartridges, A-T now creates high-performance microphones, headphones, wireless systems, mixers and electronic products for home and professional use.
Winner of numerous industry awards, Audio-Technica manufactures products that set quality, durability and price/performance standards for live sound tours, broadcast and recording studios, corporate and government facilities, house-of-worship venues, and more. A-T microphones are chosen for critical government installations such as the U.S. House of Representatives and Senate. Audio-Technica microphones and wireless systems are also selected for major broadcast music events, including the GRAMMY® Awards and the Rock & Roll Hall of Fame induction ceremonies.
“We are thrilled to welcome The Nelons into the Audio-Technica artist family,” states Audio Technica VP of Artist Relations, Roxanne Buchanan. “Their stellar vocals are consistent with the excellence our products bring to a musical stage. Their performances on the Gaither Homecoming Tour, as well as television appearance and other events, garnered our attention, and we are excited to add them to our roster!”
The Nelons are delighted to be associated with a company with such a rich history for providing first-class audio equipment. “Audio-Technica products have provided audio coverage and technical support for so many wonderful events, like U.S. presidential debates and many sporting events, including World Cup Soccer, the Super Bowl, and the Olympics. We are truly honored to be a part of this team,” states Nelons’ member, Jason Clark.
Audio-Technica U.S., Inc. markets and distribute products throughout the Western Hemisphere. With other operating companies in Europe, Singapore and Hong Kong, Audio-Technica today is a global leader in its field, committed to providing superior performance and exceptional value for customers around the world.